Bodhi, the File Drawer, and a Senior Moment? 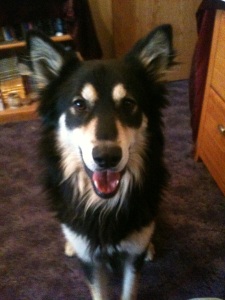 Earlier today, as I sat working at the computer, Bodhi began sniffing and licking the top of the lower drawer of my wooden file cabinet. Well, I thought, this is what happens when you take one day off from seriously exercising the dogs, and went back to work. Then an hour ago, he started again. Intense sniffing. Licking. He obviously had a burning urge to audit my tax receipts, right? Well, not exactly.

I opened the drawer, and pushed some of the files to one side. I couldn’t believe my eyes! There, in the bottom of the drawer, was…drumroll…a bunch of kibble! Yes, dog kibble—in the bottom of my file drawer! I had one of those “huh?” moments where the world slips sideways and things seem surreal. It made no sense whatsoever. Could Bodhi have somehow carried his rolling treat ball into the room and emptied most of it into the drawer? And if so, why? Or worse, had I somehow poured kibble into the file drawer, and if so, could someone please book me into the nearest CRS (Can’t Remember S#%*) care facility?

Then it dawned on me. Mice! We’d had a problem with mice earlier in the year, but had thought our troubles were over. I guess that was overly optimistic. I suddenly remembered finding, a few weeks ago, that the bottom of a bag of expensive organic kibble had been chewed open. I’d immediately switched to keeping the kibble in one of those spinny-top sealed plastic containers, but I guess those industrious mice had started an well-organized hoarding surge before I realized it. Unbelievable! So we’re back to square one with the mouse problem, but I have to give Bodhi props. For all of his destruction, he’s earned a point for discovering our latest mouse problem. Go, Bodhi!

What happens when you don’t have treats?

This blog really ought to be titled, “What happens when you make a caffeine-deficient, spur of the moment decision to take the dogs out?” My husband and I have a weekday morning routine: each of us separately takes one of the dogs somewhere. For example, my husband might take Sierra hiking in the mountains behind our house while I take Bodhi to the park to work on his dog reactivity. This way, the dogs get time away from each other, and one-on-one time with each of us. It gives us plenty of exercise, too. On alternate mornings, though, my husband gets to sleep in for an extra hour, a nice break since these outings take place before he leaves for work. Some of the alternate days turn into “days off” for the dogs where they run and play around the house but don’t get taken anywhere, but more often, I try to get them out, at least for a long walk.

This morning before coffee (beware when a sentence starts that way), I decided on the spur of the moment to take both dogs for a long walk around the park. We are lucky that in addition to an off-leash “dog park” area, there are a series of surrounding trails and paths to explore. I chopped up a bunch of treats, since we encounter other dogs along the trails, and Bodhi and I practice classical conditioning as we pass. We arrived at the park,  I unzipped my pouch to put my car keys away, and…it’s empty. Empty! Where are the treats I oh-so-carefully cut up? On the kitchen counter, where they’re doing the most good. Right. Now, the park is thirty minutes from my house, and I was not going back for the treats. What would I do when we passed other dogs? How would Bodhi react? Would he lunge and bark, or would our work up until now carry us through?

With cautious optimism, we set out. I had also worked quite a bit on giving Bodhi treats for walking nicely next to me, and I’m happy to say that the position has become more or less a default for him now, with or without treats. He wanders out front some, which I allow both dogs to do (after all, this is their exploring/exercising time), but does not pull. We walked briskly through my favorite areas of dense foliage, surprisingly forest-like for a city park, and around the dirt track that reminded us we’re still in the desert after all. Coming around the dirt track, Sierra spied a dog and owner at a distance. See, that’s the problem—Sierra has seriously preternatural hunting skills, and can spy things that are so far off that I can’t even see them. Then she goes on high alert, body tense, eyes laser focused. She’s not dog-aggressive, but is so intent on wanting to go and greet that she gets frustrated if she’s not allowed to, which boils over into arousal, which sets Bodhi off. Well, where would the challenge be if it were just a straight case of classical conditioning with one dog?

We probably passed five separate owners with dogs. Bodhi wanted to lunge and bark all five times. The low growl started three of those times. However, in all cases, he paid attention to me when I asked for it. He had been so conditioned by all of our previous efforts that looking at me and walking alongside me instead of lunging and barking at the other dogs was possible. Today there were no food rewards, but there was plenty of praise and petting. And you know what? He did just fine. I was proud of him.

I’ve had training clients over the years who are on the fence about using treats to train. “But what happens when you don’t have treats?” they ask. The answer is, if you’ve laid the groundwork with lots of positive reinforcement, what happens is exactly what’s supposed to happen—your dog responds beautifully.