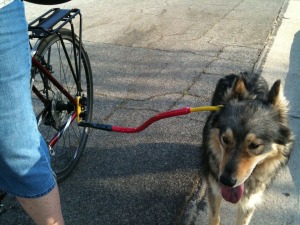 I’m always on the lookout for new and exciting ways to exercise Bodhi and Sierra. We already do urban mushing, which is big fun, but I was hoping to find something that would give me a bit more exercise than just balancing on a scooter as the dogs pull me.

I like the idea of having one of the dogs running alongside as I ride a bicycle, but there’s no way I’d allow either of them to do that off-leash. Holding on to a leash as I ride isn’t an option, as both dogs are strong and easily distracted, and eating dirt is not one of my life goals. So I’ve been looking for the right bicycle attachment.

I’d previously tried a product that I’d had high hopes for but ultimately found problematic because it placed the dog fairly close to the side of the bicycle. Each of my dogs had been uncomfortable with this arrangement and so each, had leaned their body weight away, which put me in danger of being pulled over. When my friend Kathy (who owns Niko the Very Handsome Husky) told me about a new product called the Bike Tow Leash®, I was excited to try it out.

The product features a metal clamp that attaches to the rear wheel mount or bike frame close to the rear axle, from which extends a heavy-duty coated, solid yet flexible “arm” that ends in a metal clip. It is suggested that the clip be attached to a wide collar, although a front-clip body harness is acceptable as well. Because Bodhi has issues with any type of collar around his neck (he begins coughing if he even pulls slightly), we used his Premier® EasyWalk™ front-clip body harness.

Kathy let me test Sierra’s reaction to her Bike Tow Leash® a few days ago. After our morning park walk together with our fur-kids I followed Kathy back to her house, where she rode her bike (which is too big for me) with Sierra attached. (Click here for video of the “test drive.”) I was surprised to see that Sierra showed none of the apprehension that she had with the other bike leash. This may have well been due to her being a greater distance from the bike. Still, I wondered, would I be able to ride without feeling like I was in danger of being pulled over? It was hard to imagine.

This morning I borrowed Kathy’s Bike Tow Leash® to try out with Bodhi. My husband and I were able to attach it to my bicycle in under a minute. I was surprised—the clamp went on and tightened easily, with no tools involved. Easy is good! The manufacturer recommends that the leash be positioned at the height of the dog’s shoulder, so I measured from Bodhi’s shoulder to the ground, and then made a quick adjustment on the clamp that placed the clip at the proper height. We headed to the park.

There were a few seconds of apprehension on Bodhi’s part at the very start—possibly due to his previous experience of being attached to the bike—which quickly disappeared. Because the metal arm positions the dog on the left side of the bike, after going in a straight line for a bit, I tried a wide left turn, which would be more difficult to execute than a right turn. It was surprisingly easy! Here’s video of that initial trial. I then took Bodhi for a spin around the large, circular dirt track where we often do urban mushing. He appeared relaxed and comfortable, and seemed to enjoy himself for the entire run. He moved along at a fast trot and I felt very steady on the bike. When Bodhi decided he wanted to drift toward the grass to check something out I was able to keep him on track, literally, and could easily maintain my balance. (According to the manufacturer, “With weight on the bike, a single finger on the seat can keep the bike upright during dog side pulls.”)

So, as you can probably tell, I am a fan of The Bike Tow Leash®. It isn’t cheap, but I figure it’s an investment. If it helps me to give my dogs proper exercise and tire them out, it’s worth every penny. I’ve got to return Kathy’s to her, but I just received my own in the mail. Soon we’ll be taking our dogs out for rides together. I can’t wait!

Late last week, Bodhi and I were at the park practicing our skills around unfamiliar dogs. Well, Bodhi was practicing his. I’m not the one who lunges and barks at strangers. The good news is, we’ve come a long way! Months ago we’d have had to be on constant lookout for other dogs so we could turn and walk away as quickly as possible. Then came practice and more practice, with me giving Bodhi the verbal cue “With me” whenever I spied a dog coming toward us. That positioned him next to me so that I could keep his attention; after all, if he was out ahead of me on the leash, the game was over. Walking next to me, his job was simply to accept treats as we passed the dog without exploding. Sounds easy enough, right? Unfortunately, it wasn’t.

As time passed, Bodhi developed better skills and more self-control. We’ve now gotten to the point that I no longer have to cue him to be “with me.” Most often when we see another dog, although Bodhi may whine a bit, he will automatically position himself next to me and look at me with an Is there a treat in it for me? expression. And there is—he’s earned it. The goal over time is to use fewer and fewer treats until finally, it’ll be no big deal for him to pass other dogs in a relaxed fashion. But for now, this is our protocol.

There was a leap of faith at one point that allowed me to stop giving Bodhi any type of cue when we passed another dog, and instead allow him to make the decision. That’s an important transition, and one I’d been hesitant to make for fear that he wouldn’t be able to do it. When he did, I was elated.

But back to our walk…my happy state of mind lasted throughout the stroll, and then we headed back to the parking lot. Just as I was reflecting on how this had been the best I’d felt about Bodhi’s behavior in a long time, there in the distance appeared a black Lab. This was not just any black Lab; it’s the one dog that Bodhi cannot seem to be around without totally losing it. Along our walk we’d encountered small, fluffy white dogs, tiny Chihuahua types, a Golden Retriever, and everything in between. Bodhi had done really well. But whenever he sees this particular dog, his self-control instantly becomes a thing of the past. This morning it was as though he’d been walking along thinking, Okay, little foo-foo dog, not a problem….Hmm, there’s a beagle, they’re fine… and then, suddenly, Black Lab! Spawn of Satan! High alert! Ironically, the dog in question is an extremely calm dog, and seems non-reactive. He and his owner both seem perfectly nice. So, Bodhi, why be hating on the poor black Lab? It could simply be because he’s a large black dog. Black dogs are, in general, harder for other dogs to read. But…I don’t think that’s it. We’ve passed other black dogs and there hasn’t been quite this level of reaction. Having adopted Bodhi from the shelter, I have no way of knowing about his past. Perhaps somewhere down the line he was attacked by a large black dog.

Not long ago, we worked with my training partner’s female Rottweiler, and Bodhi did very well around her. In fact, they’d ended up sitting almost side by side. So I don’t think it’s just a question of a dog being large and darkly colored. Of course, the Lab in question is a male and the Rottie was a female. But regarding the Lab, maybe there truly is something about this particular dog’s vibes that just bother Bodhi. Interestingly, one morning when I had only Sierra with me, we ran into the same Lab. After his owner and I had chatted, we decided to let the dogs say hello. I don’t normally do this, so Sierra was elated to be able to actually go and greet another dog. After a few seconds, although there were no signs of stress from either dog, the Lab’s owner said, “Okay, that’s enough.” This couple-seconds-of-greeting is actually a good practice, but being that the woman wasn’t a trainer, I figured she might have her own reason for wanting to keep the greeting brief. When I asked whether her dog had ever had issues with other dogs, she responded in a way that wasn’t affirmative, but wasn’t quite a no, either. Ah. So maybe there is something to Bodhi’s feeling about this dog. Or, again, maybe it’s just large, black Labbish dogs in general. At this point, I just don’t have enough information to be sure.

This begs the question, should a dog be expected to like all other dogs? In my opinion, the answer is no. I certainly don’t like every person I meet, and a chosen few, I most definitely choose to avoid. Why should my dog be any different? Of course black Labs are not evil (well, most of them, anyway!). But for whatever reason, this particular one bothers Bodhi. So out of deference to his feelings, we’ll keep our distance and keep up the good work.