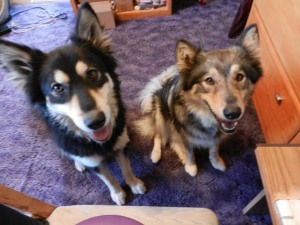 My husband, a talented musician and artist, recently had a day off work. He planned to do whatever needed doing around the house, and then retire to his studio to enjoy creative pursuits. I, being the ever-dutiful wife, took the opportunity to leave him in charge of the dogs, and went out for lunch and shopping with a girlfriend. (Okay, maybe the word isn’t dutiful so much as opportunistic.) I returned an hour or so past the dogs’ usual feeding time.

After greeting everyone, I checked with my husband: “Did you feed the dogs?”
“Yes,” he answered.
“Great, thanks,” I responded.
“And then,” he reported proudly, “I gave them their dessert cookies.”
“Their dessert cookies? What’s that?”
“Well, they were looking at me like they were expecting something right after they finished eating. Don’t you give them cookies right after you feed them?”

I burst into laughter and informed him that our dogs are very good trainers, and that no, they do not need, nor have I ever given them, dessert cookies!

It’s true that our dogs get an afternoon snack, which rotates on a daily basis. Some days it’s a stuffed, frozen Kong; others, a bully stick; and once or twice a week, oh happy day! It’s a marrow bone knuckle. But I always wait to give these snacks thirty minutes to an hour after they’ve eaten, and occasionally I’ll wait even longer. I do this partly because I’d like them to digest their food first, but also because I don’t want them linking the meal and the snacks together in their minds, which results in relentless petitioning for “dessert cookies.”

Our previous dogs, Mojo and Soko, had somehow trained us that after each and every time one of us did the dishes, they received cookies. I honestly can’t remember how that one started, but it became a habit in record time; who says humans don’t learn fast? Our current dogs, Sierra and Bodhi, have trained me that when I wake up in the morning and walk out of the bedroom (they don’t sleep with us), they get cuddles and tummy rubs. Sure, I’m off the hook if I have a pressing need to do something else first, or I’m in a rush, but hey, you don’t get far in this house without paying the cuddle tax. That one is probably an example of a routine we all created together, and really, it’s to our mutual delight. Although it’s not a bad thing, it is another example of something the dogs have come to expect.

These types of learned patterns are normally harmless, although they can become problematic. I frequently hear from training clients, for example, that they can’t ever sleep late because their dogs expect to be fed at a certain time in the morning, whether it’s a weekday or a weekend. These dogs are apparently completely insensitive to the fact that their owners have stayed up late the night before eating popcorn and watching reruns of It’s Me or the Dog. Well, that’s what happens when a pattern gets created! Dogs have magical, invisible watches that never seem to run slow, although I’d argue that they do often seem to run fast.

Personally, I purposely don’t feed our dogs the moment I wake up, and I don’t feed them the minute I walk through the front door, either. If you do those things, you end up with dogs who expect things on a schedule and get stressed if that schedule is not kept. Sure, there should be a loose structure, and I’m not suggesting that anyone feed their dogs three hours past the normal time. But varying feeding, walks, and other daily activities at least half an hour or so one way or the other can help to prevent the dessert cookie syndrome. I’m still laughing over that one!

This entry was posted on Tuesday, February 14th, 2012 at 5:59 pm and is filed under Behavior/Training, General/Misc.. You can follow any responses to this entry through the RSS 2.0 feed. Both comments and pings are currently closed.