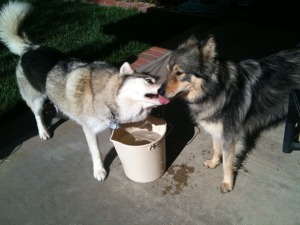 As any dog owner knows, people aren’t the only ones who develop lasting friendships. There’s no mistaking the excitement of a dog who spies his friend at a distance and begins, with a wagging tail and a sparkle in the eye, to pull toward the dog for a joyous greet-fest. Owners often make a point of meeting at a local park to allow their dogs to play together, or setting up private play-dates. It’s nice to have the assuredness that the dogs like each other and get along, as opposed to the hit and miss play matches that arise from random encounters. But do dogs that are long-time friends always get along? I think not, no more than human friends love each other 100% of the time.

We often don’t give credence to or think about the idea that dogs can sometimes just be having a bad day. But how could a living, physiologically complicated being not have an off day once in a while? We’ve all been through times where our dogs seemed lethargic, or disinterested, or just not themselves. At other times, we’ve noticed that they are much more active than usual, to the point that we think, Oh boy, I’d better help him get rid of some of that nervous energy before he finds a way to do it himself! And sometimes dogs are just not feeling well.

Now think about taking that dog who’s having an off day for a play date. Is he going to interact in the same way he normally does? Maybe, but very possibly not. The way the other dog tends to be a bit pushy and overpowering may be fine with your dog on any other day, but on this day, maybe not so much. So the other dog gives a hip slam, and instead of taking it as an invitation to chase as he normally does, your dog snarks at him. The question of “Where did that come from?” hangs in the air. Sure, it may be that the other dog was just having a rude moment, but again, it may be something else.

When this type of thing happens, owners often worry that the dogs aren’t going to get along anymore. But if it’s been an established, friendly relationship, and the dogs normally play well together, it may just be a signal to watch the snarky dog’s behavior at home carefully, and perhaps to take him in for a veterinary exam. Or, he might just be having an off day, and the dogs will go back to acting like doggy BFFs the next time they meet. After all, we all know that long-time friendships can weather a few bad days.

This entry was posted on Wednesday, November 14th, 2012 at 4:44 pm and is filed under General/Misc.. You can follow any responses to this entry through the RSS 2.0 feed. Both comments and pings are currently closed.