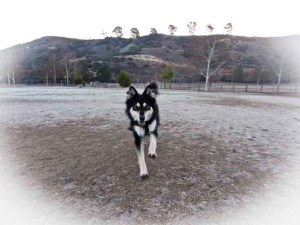 Yesterday morning I took Bodhi to the park. Frost covered the ground, and we only encountered two other diehard walkers the entire hour we were there. I took the opportunity to practice off-leash work in various locations, and Bodhi did wonderfully well. In fact, it was difficult at times to get him to leave my side. “Okay!” I’d give the release word, along with the gesture that lets him know he’s free to go and romp. He’d just look at me. “Frolic!” I demanded. Nothing. Oh well. If that’s the worst problem, it’s fine with me!

This morning, on the other hand, I took Sierra with me. There were two differences: no frost on the ground (although it was still damned cold), and she was on a long line. Why? Because whatever she’s got going genetically predisposes her to have a super high prey drive, and when that’s in full-on mode, she’s also got selective hearing. Sure, we’ve practiced off-leash recalls in safe, enclosed areas, and we’ve done them with her on the long-line as well. We’ve practiced when there are distractions around, and for the most part she does incredibly well in all of those situations. So why not go the next step and allow her off-leash freedom? Because I know who she is. And I don’t have such a massive ego that I feel I can change a dog’s genetics, bend any dog’s temperament to my will, or solve every problem out there.

Unfortunately, there are trainers who promise to fix any problem, guaranteed. That crossed my mind the other day when I received a call from a woman in a very difficult situation. The family has four dogs, and two are fighting. The fighting dogs are each seven years old and had grown up together. One was a doxie and the other, a German Shepherd. The fights began a few months ago and became progressively worse. A few days ago, the woman came home to find the doxie covered in blood from a badly torn ear. There had never been issues between the two before, there was no valuable resource being guarded as far as she could tell (including them), and nothing had changed in the home. I suggested she get the dogs to a vet for a full blood workup, including a full thyroid panel, before beginning training. If a thyroid imbalance, liver problem, or other medical issue is causing the sudden aggression, there’s no reason to spend money on a trainer. If it isn’t physiologically-based, then yes, I told her, we would certainly be happy to come out and assess the situation.

I’m glad the woman found us instead of a trainer who would promise to “fix” the situation no matter what, because the fact is, there are some situations that are not fixable to the point that everyone can remain safe (especially if there are children in a home). Can you imagine a psychologist promising to make you like anyone, even someone you’ve taken a serious dislike to? Why do we think we can do that for dogs? Would any trainer make Sierra 100% reliable off-leash, ever? I think not, regardless of what tools and training methods were used. As a trainer, I can get her to a high degree of reliability, but as a dog-mom, I’m sure as hell not taking any chances; why would I?

It’s nice to believe that each and every dog-related situation can be solved, and that every behavior can be modified in every case. But this is the real world. Trainers can be an incredible amount of help in most cases, but there are some limitations. Being able to recognize and accept those limitations and advise owners on a realistic, appropriate course of action is part of the difference between a good trainer and an excellent one.

This entry was posted on Tuesday, February 12th, 2013 at 4:59 pm and is filed under Behavior/Training. You can follow any responses to this entry through the RSS 2.0 feed. Both comments and pings are currently closed.