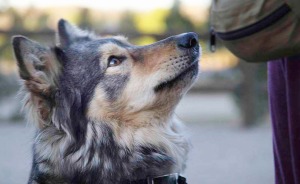 How much time do you spend each day training your dog? If you answered “30 minutes,” “An hour,” or even “Three 10-minute sessions,” you’re wrong. Oh, I believe that you’re working on specific skills during those periods—but the truth is that you’re training your dog 24 hours a day, every day.

Dogs are masters of prognostication. They might not be able to tell you the winning lottery numbers, but they sure know that when you grab that long thing with the metal clip on the end, a door will open and a walk will follow. If my dogs could speak, they’d tell you—once they got done ordering out for pizza and beer—that the television remote being clicked on means that Mom is going to be on the couch watching that strange box with the moving pictures, so we might as well go lie on our dog beds for a while. They also know that when Mom leaves with those letters and boxes in the morning she usually returns quickly, and that if Mom and Dad leave the house after 6:00 at night, there’s a good chance they won’t be home until after dark. Dogs are such excellent observers that they can even predict with great accuracy how long we’ll be away based on the type of footwear or clothing we’re wearing.

Learning also happens organically, for the simple reason that dogs learn to repeat actions that are rewarded. I can’t tell you how many times I’ve sat across a kitchen table from a dog owner as they’ve told me how they don’t want their dog up on their lap when they’re sitting at the table; as they’re tell me this, the dog has his paws on the lap, and they’re stroking the dog’s fur.

My own dogs, Sierra and Bodhi, have learned a fun and interesting thing. It began back when we only had Sierra. At some point she had lowered the front part of her body in a sort of bowing stretch as she was greeting me; I petted her while she was in that position, scritch-scratching from her head all the way down to her tail. She loved it, and began to repeat the behavior. Since I continued to reward it, it became her default way of greeting me in the mornings. When we got Bodhi, he learned the behavior from observing her. Of course, it was soon reinforced by being petted. Now when I wake up in the morning, I’m greeted by two bowing dogs. Ah, finally! Concrete proof that I’m the pack leader!

This entry was posted on Tuesday, February 25th, 2014 at 7:30 pm and is filed under Behavior/Training. You can follow any responses to this entry through the RSS 2.0 feed. Both comments and pings are currently closed.