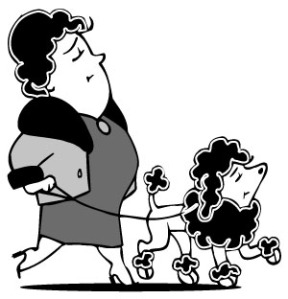 I received a phone call yesterday from a woman in need of training for her dog. She had three dogs—two males and a female—and it seems that the female was “a real Snooty Patootie Pants.” My response, after stifling a burst of laughter, was to ask her to kindly define “Snooty Patootie Pants.” I mean, it’s not exactly a standard term in the Dog Trainer’s Dictionary. I’ve heard this highly descriptive type of term before. One woman’s dog was a “nervous Narvis.” Another’s had “anger management issues.” And one caller kept going on about her dog: “He’s so selfish. It’s always all about him,” prompting me to finally ask with a laugh whether we were still talking about the dog.

These descriptions are funny and charming, but it really is important when discussing dog behavior that we have consistent definitions. This becomes especially crucial when discussing aggression issues. I can’t tell you how many owners I’ve heard describe their dogs as “aggressive,” where it meant anything from the dog being a typical nippy puppy, to being overly enthusiastic in play, to simply jumping on people. None of these constitutes aggression! Can you imagine someone returning a dog like this to the shelter and telling them the dog is aggressive? You know what happens next. (Although I would love to see the shelter worker’s face when the person told them the dog has “anger management issues.”)

While it’s true that dogs certainly have emotions, some of us tend to anthropomorphize, which can lead a discussion into muddy waters. Although the general meaning is understood when someone says a dog is “anxious,” it doesn’t really give enough information. What we really need is not an interpretation of a dog’s state of mind, but a simple recounting of what the dog does. Perhaps one anxious dog hides in a crate all day and cringes when people go to pet him. Another might run from the room when a particular sound plays on the television. As for aggressive dogs, again, what does the dog do? Is he lunging and barking when passing other dogs on a walk? Does he bite visitors at the front door? (Tip for owners: trainers really, really like to know about that last one.) A clear description of a dog’s behavior allows us to get a better picture of what’s going on so that an appropriate treatment plan can be formulated. And that way, in the end, we can help the dog—even if she is a Snooty Patootie Pants.