Your Dogs are Fighting: Step In or Step Off? 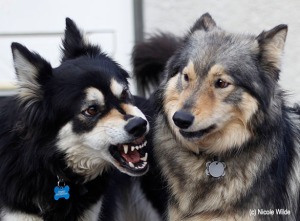 Yesterday afternoon, I gave Sierra and Bodhi a snack of stuffed, frozen Kongs. Bodhi, of course, finished his first—the boy inhales anything in front of him. Sierra likes to take her time, alternating between excavating treats and giving Bodhi her patented Look of Death any time he so much as looks in her direction. Bodhi, rather than taking the hint and leaving her alone, will walk past at a distance, sniffing for crumbs on the ground. If he gets too close, Sierra will launch at him with a “GRRRR!” that startles even me in the next room. I have no doubt it startles Bodhi as well, particularly when accompanied by Sierra’s fast, repetitive clacking of jaws. At that point, Bodhi normally backs off.

Yesterday, though, he didn’t. In a demonstration of misplaced machismo, he grabbed the Kong away from Sierra. From the next room, I suddenly heard the unmistakable sounds of fighting. I ran in to see Sierra driving Bodhi backward with what appeared to be mouthfuls of his fur between her teeth. Bodhi was carefully stepping backward while still facing her, attempting to defend himself while getting the hell out of Dodge. One sharp, “Hey!” from me and it was over. The two voluntarily separated, as I knew they would. My reaction had been instantaneous; when we’d first adopted Bodhi, he and Sierra had fought for 10 days. I’d quickly become adept at jumping in and separating them. But in this case, I wondered afterward, should I have interfered? After all, possession is 99% of the law in the animal kingdom, and Bodhi shouldn’t have tried stealing from the Queen. I should have let her tell him off.

Dog fights—even harmless skirmishes—sound very frightening. Male dogs in particular can sound like there’s a barroom brawl going on. It’s understandable that when we hear those sounds, for many of us, our first reaction is to jump in and break it up. And there are times when that is absolutely the right thing to do. But sometimes, interference, well…interferes. The dogs never straighten out the situation at hand, and so it arises again. Had I allowed Sierra to properly “instruct” Bodhi as to the house rules, chances are he would have been less likely to attempt the Great Kong Caper the next time.

This begs the obvious question, How do we know whether to interfere or not? I only wish there were an easy answer. If either dog is being injured, breaking things up right away is obviously necessary. But if not, should you let it go on or step in? Well, it depends: it depends on your particular dogs, their past history together, their relationship, their level of communication with each other, and the particular scenario. If skirmishes happen often, a trainer can assist with understanding body language and signaling, and sorting out what’s really going on between the dogs. In the meantime, consider whether stepping in—or stepping off—is the better choice.

You can check out my books, seminar DVDs, seminar schedule and more at http://www.nicolewilde.com and find me on Facebook and Twitter.

This entry was posted on Monday, July 28th, 2014 at 6:38 pm and is filed under Uncategorized. You can follow any responses to this entry through the RSS 2.0 feed. Both comments and pings are currently closed.

6 Responses to Your Dogs are Fighting: Step In or Step Off?