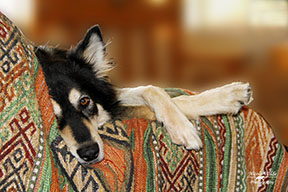 This morning, as I was making my breakfast smoothie, Bodhi and Sierra were hyper-attentive as usual. Why, you might wonder, were they so focused? Are they invested in making sure I get enough fruits and veggies? No. They’re making sure they get their fruits and veggies, or at least the slices of banana and cucumber that they know I’ll share with them. Since those two items go into the smoothie at different times, the dogs are pretty much sitting there for the duration. At some point, though, I’ll turn to them and say, “That’s it for dogs!” They then give sad little doggie sighs and pad away to lie down and wait for the next exciting event of the day.

The phrase, “That’s it for dogs!” isn’t something I ever taught my dogs. But they’re both smart, and have learned through hearing the phrase many times that it’s always followed by a big fat nothing. It’s not a phrase that had to be formally trained. One definition of osmosis is “the subtle or gradual absorption or mingling.” And so I think of this type of non-formal, lifestyle training as Training by Osmosis.

Here’s another example: In the early mornings, my husband and I take the dogs out for exercise. We do this separately, since my husband takes one dog to a local park where they can run together and I, the non-runner, take the other dog to a different park where we can hike. We switch off dogs, and it works out nicely for everyone. We live in a rural area on a small hillside away from the road, and sometimes we let the dogs run to the cars before having their leashes put on. Both dogs will typically run to the closer car. But if it’s my day with Sierra and I say, “Sierra, the other one,” she’ll immediately turn and race toward the other car. Did I ever teach her what other means? No. It’s something she picked up, probably from a combination of watching my body language and where I was looking, and repeatedly seeing me walk toward the other car after uttering that phrase.

Formal training in obedience commands is a great thing to teach. But dogs are learning all the time, for better or worse. (You put away the dog cookies on that low shelf with the broken door? Lesson learned in record time!) Right now, as I stand at the computer typing, Sierra is sitting and staring at me. It’s almost time for the dogs to be fed. I’ve just told her, “It’s early,” and so she’s walked out of the room. This is another phrase she and Bodhi have learned through osmosis—as the definition goes, subtle, gradual absorption. It’s fascinating to think about how much more dogs understand than what we give them credit for. They’re masters of observation and excellent learners, particularly when there’s something in it for them. What have your dogs learned by osmosis?
__________________________________________________________________

You can find my books, seminar DVDs and more at www.nicolewilde.com. You can also find me on Facebook and Twitter, and see my artwork at www.photomagicalart.com.