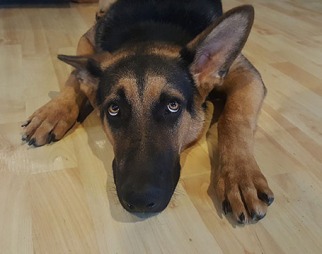 movies. In a world where there’s all too much to be stressed out about, and too much work to be done at any given time, movies offer a wonderful escape. Besides, I just plain enjoy watching a great film.  However! If there’s a dog in the movie—it doesn’t need to be in bad shape, or stray, or sick, mind you, just a happy, friendly family dog—I spend the entire film worrying about whether something is going to happen to the dog. If it’s a suspense film, that goes double.

My husband and I are a Netflix-loving couple. This past Saturday night, we settled in to watch our latest choice, Wind River. The trailers we’d seen showed a gritty drama with good acting and an intriguing story. We were both looking forward to it. After a brief, dreamy opening montage featuring a young woman running across a lake as credits rolled, a stark opening scene appeared: three beautiful coyotes stood at a distance from a herd of cattle. A man with a rifle crouched in the bushes. Before I could say, “Oh, crap,” the man had shot one of the coyotes. There was then an immediate closeup looking down upon the bloody carcass. I can’t tell you whether the coyote was dead or still breathing, because after the first split second of seeing it, I couldn’t watch. I also can’t tell you the rest of what happens in the film, because we turned it off.

Movies have ratings for a reason. Parents don’t want their kids exposed to sexual or violent content. While PG-13 cautions parents in a general way that some material may not be suitable for children, we are also now seeing more specific warnings regarding things like brief nudity, foul language, mild violence, and so on. So why not have a warning about violence to animals? Surely animal lovers make up a large enough segment of the population to warrant it, and yet there seems to be no concern whatsoever about violence toward animals in films. It’s a sad reflection on our society.

As an animal lover, a warning would be appreciated and would have saved me from seeing many things I can never un-see. There was the film Fear, where teenagers invade a home and torture the family. Hmm. Whatever happened to the dog, who went missing early on? Wait! He’s coming back in through the dog door! Oh, sorry, that was just his head. Yes, his head. WTF? Sorry, I understand the concept of shock value, but what would happen if that level of graphic violence were applied to a kid? Would a scene featuring a headless child have ever make the final cut? Then there are the times nothing bad has happened yet but you just know it’s bound to, like in the film Signs—the one about crop circles and unseen, possibly alien monsters. I was all but yelling at the screen as the family left their German Shepherd tied out in the field as they took cover indoors. And you just knew in Secret Window, where Johnny Depp was a writer living alone in a remote cabin, that nothing good was going to happen to his dog—and you were right. Did I spoil some of the suspense for you? You’re welcome. Now you can avoid those films entirely.

Look, I understand the need for dramatic tension in films. It’s usually a good thing. I even understand the need for bad things to happen to good dogs in a storyline—if it’s really called for in the overall plot and serves a purpose. And I realize that not everyone is as sensitive about violence towards animals as I am, and as many others are. Still, it would hurt no one and would help many of us to have some sort of rating to warn us, so that we could at least make an informed choice before deciding where to spend our movie dollars.

Who Knows What’s Best for Your Dog?

When I first adopted Sierra from the shelter, I was told she’d been there four times previously. No one knew whether she’d had the same owners each time or four different ones. Regardless, she had been brought in as a stray this time. Once home, I quickly discovered that she had a combination of separation anxiety and mad skills as an escape artist. And so, we began a program of behavior modification for the separation issue and lots and lots of obedience training, particularly on the recall.

I was careful almost to the point of paranoia about not letting Sierra off leash on our local park trails until she had a rock-solid recall. At the time, a group of owners who regularly walk with their dogs off leash invited me to let Sierra go running through the hillsides with them. I declined. I explained about having just adopted her and her not being trained yet. However, my concerns were quickly dismissed. It would be fine, they said. I replied that I just wasn’t going to take the chance that she’d run off, especially given her history. Still, each time I saw the group, they asked. Each time, I declined. Was there whispering going on about the lady who was so overly worried about her dog? I’m sure there was. Do I care? Not one bit.

More recently, there’s been a new person we see at the local dog park. Sierra and I stay on the small dog side (which is empty, save for us) while he and his two large dogs inhabit the big dog side. It’s a good arrangement, as the dogs all run the fence together and get some exercise. The first day we met, he suggested that I bring Sierra over to the other side to play with his dogs. I told him that while she’d be fine with one of his dogs, chances were that she wouldn’t be quite so fine with the other one. He said, “Nah, they’ll be okay, come on over.” I politely declined. He insisted a few more times and I said no a few more times. This went on day after day. I’d told him five different ways that a fight might result, and yet he kept insisting. I finally said firmly but nicely, “I appreciate the offer. The thing is, I know my dog better than you do. Trust me, it will not be fine.” Will this stop him from asking? We’ll see.

It’s a strange thing for someone to think they can predict a dog’s behavior better than the person who lives with that dog 24/7. Perhaps it’s partly due to a lack of understanding about canine behavior in general. It certainly seems as though there are plenty of people who believe it’s fine to allow their dogs to run loose in non-legal public spaces even when encountering other dogs, as though a fight is the farthest possibility from reality. Or, they regularly allow their dog to romp together in parks with tons of unfamiliar dogs without a second thought. Of course, there are dogs who get along with pretty much anyone, but a little caution goes a long way.

While it can be difficult socially at times to stick to our guns and to refuse offers of these sorts, we must do what we can to keep our dogs safe. It’s part of being an advocate for our dogs, something I am very passionate about. When an old-school vet slams your non-compliant dog on his back or a trainer says you need to “show him who’s boss,” it can be difficult to speak up, especially because there’s an authority figure involved. But you are the only thing standing between your dog and the big, bad world, the only thing keeping him safe and secure. He counts on you to not put him into situations where he could get hurt, and to keep him safe when someone is threatening him, whether physically or emotionally, regardless of whether it may be socially awkward for you.

In other news, happy dance! My artwork is finally available on products such as mugs, notebooks, totes, fleece blankets, phone cases and more (in addition to prints, of course). Most is animal-related, and they make great gifts for yourself or someone else! Check it out at www.nicolewildeart.com.