Do Some Rescues Need to be Rescued?

The woman on the other end of this morning’s phone call was distraught about her dog and in need of help. This was not unusual. That her dog was behaving aggressively was not unusual, either. When she told me her large purebred dog’s breed, I asked whether she had by chance gotten the dog from a particular local rescue group. Sure enough, she had. It was all I could do not to utter the expletives that came to mind. Why had I suspected that the dog might have come from that rescue? Because over the years, I have had countless calls from owners who adopted from them, and over 90 percent of those dogs had aggression issues.

This gets my hackles up. Having been involved in rescue for over 20 years, I understand what it takes to run one. For years I co-ran a rescue for wolves and wolfdog mixes. Granted, it was a bit different because many of the dogs could not be adopted out. However, before that, I worked for a low-kill rescue organization, as well as volunteering (and then volunteer coordinating) for years at a Los Angeles city shelter. I networked with many groups, got very involved in and helped out others, and understand the ins and outs of rescue. I’ve seen the best and the worst of what can happen. And I’m here to say that the “worst” doesn’t have to be this way.

We all want to save dogs. But the sad truth is that not all dogs are adoptable. If a dog is behaviorally so unsound as to be a potential danger, a rescue has no business adopting that dog into a home with an unsuspecting owner who may (or whose kids may) be injured by that dog. Even if a dog has “workable” aggression issues, the screening process for a qualified home had better be very thorough. Years ago, I visited the home of a disabled woman who had adopted a large breed dog from a rescue that dealt only in that breed. The woman had a “helper” who was a friend that came by daily. However, this well-meaning friend had some mental challenges and was not able to truly take responsibility for helping with the dog. This 90-pound dog very calmly sat down in front of me, took my forearm in his mouth, and stared at me as he began to bite down with increasing pressure. It was strange and unsettling. I was not harmed, but given this and other behaviors I observed, it was obvious this was not the right dog for this home (or possibly any home). Although this was a different rescue group than the aforementioned one, I had also seen quite a few aggressive dogs come through that organization over the years.

Most rescue groups bail dogs out of shelters where they would otherwise be euthanized. This is laudable, but what then? Some have a network of foster homes where a dog can settle in and his behavior can be properly observed. If there are other pets in the home, it may be possible to find out whether the dog gets along with other dogs and even cats. If there are children present, the dog’s behavior around children can be assessed as well. All of this is the best-case scenario. Unfortunately, some groups simply get dogs from shelters and then, with no temperament testing at all, put them up for adoption. Can you guess the effect this might have on the return rate, not to mention the chance of harm to adopters? And what about the dog’s health? How can anything be known if the dog has just come out of a shelter?

The organization I used to work for had an adoption form that some joked was as lengthy and detailed as a college application. And you know what? It was, and that was fine. It automatically screened out those who weren’t committed enough to take the time to fill it out, and it told us a lot about the potential adopters. I’m not suggesting that an overly difficult, long, or judgmental adoption process is the goal. It’s not. But some groups I’ve encountered (rescue groups, not shelters) have absolutely no adoption application at all, nor do they take the time to so much as have an in-depth conversation to judge whether the home might be appropriate. There should be a happy medium.

Then there are home checks. Over the years, I have seen people write on applications that they lived on a ranch with acreage, when in reality they lived in a studio apartment. While I would like to think that most potential adopters are honest, the sad truth is that some people will lie to get what they want. A home check should be a part of every adoption, not only to ensure that the dog will have adequate living conditions, but to see whether anything needs to be fixed or changed before the dog arrives. Owners often miss things like the fact that an unfenced pool area can mean death for a dog who’s never encountered one before, or that the garbage bin that’s sitting against the backyard fence is a great stepping-stone for a dog to jump over and out. Fencing, kids’ toys that could be ingested, and other safety concerns are things that must be surveyed first-hand.  Again, to clarify, I am not talking about city or county shelters here, but rescue organizations that have the time and resources to do this. And the idea is not to judge whether anyone is “good enough” for the dog, but to help them repair what’s repairable in order to make the environment safe for the dog, and if it can’t be made safe, to prevent possible tragedy.

Rescuing dogs is hard. It’s more difficult physically, mentally, and emotionally than non-rescuers will ever know. It can be extremely rewarding, of course, but it can also be heart-wrenching. My hat is off to rescuers everywhere, truly. But if an organization is going to rescue, there needs to be ethics and oversight in place. Simply bailing dogs out of a shelter, putting them directly into homes with no regard to health or temperament, charging way-over-average, exorbitant rates and then boasting about how many dogs you have adopted out is NOT ethical rescue. Does an adoption process have to be overly long and complicated? No, and it shouldn’t. But taking the time and making the effort to place dogs in well-matched, loving homes will ensure that the dogs stay in those homes. And really, shouldn’t that be what it’s all about?
______________________________________________________________________________________________On 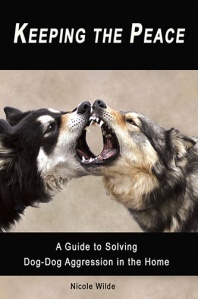 You can find my books, seminar DVDs and blog at www.nicolewilde.com. Don’t want to miss a blog post? Subscribe above and be notified by email of new posts. You can also sign up for my Training Tips Tuesdays by going to www.nicolewilde.com and clicking on Join Nicole’s Inside Scoop List. You’ll get free tips on training and behavior weekly! You can also find me on Facebook and Twitter.

This entry was posted on Thursday, March 22nd, 2018 at 4:52 pm and is filed under Uncategorized. You can follow any responses to this entry through the RSS 2.0 feed. Both comments and pings are currently closed.

14 Responses to Do Some Rescues Need to be Rescued?