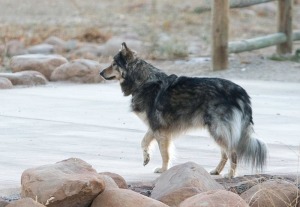 Every dog trainer would like for their dogs to be compliant 100% of the time. I mean, we’re trainers, right? But dogs are not robots, and although a dog might listen 99% of the time, there is always that 1% that keeps trainers humble and reminds us that nothing in life is 100% guaranteed. Sierra, for example, is very well trained. Because of all the training we did early on and that we still practice, I often have her off-leash at our local park early in the mornings. As we walk the trails and remote areas, I am able to call her away from any fellow walkers we encounter, whether they have a dog with them or not. I can even recall her mid-chase from a bunny or squirrel (and yes, that took a ton of work). However…let me share the story of this morning’s walk with you. I had Sierra at the park bright and early, and after we’d finished our normal route, we headed toward the dog park that’s set in one corner of the larger park. I normally let her into the small dog side when her buddies are on the big dog side, since they enjoy racing along the fenceline together. When we were halfway across the grassy area leading to the dog park, after ascertaining that no one else was in sight, I let Sierra off leash. She started to race happily toward the park.

Just then, a man walking his Lab came down the hill that runs alongside the park. Now, this particular man is someone I used to be friendly with, until it became apparent that he had anger issues, as well as believing that not only is he an expert in dog behavior, but that it’s his job to tell everyone else what they’re doing wrong. Unfortunately, his knowledge is in inverse proportion to the amount of advice he gives. Nevertheless, Sierra loves this guy. Any time she’s run up to him in the past, he’s given her treats (the crappy quality yummy ones I don’t let her have at home) and petting. But nowadays, I really don’t want her near him. And so, when she spied him at a distance this morning and froze, I told her calmly from a few feet away, “Sierra, stay.” Instead, she took a few steps toward him. Then she began to run. Stern Mom voice: “Sierra, no!” Nothing. Now she was really running. Happy voice: “Sierra, come!” Nope. Nada. Zilch. Nothing I did worked. This was not good. Here was my well-trained dog, racing away from me at top speed toward something she wanted. The man, of course, saw and heard the whole thing. When she reached him, did he, with his infinite dog training wisdom, ignore her and withhold treats and petting so as to teach her that she got nothing when she disobeyed her owner? Nope. He gave her plenty of treats, petting, and praise. Great! So now, not only had she not listened to me, but she’d been rewarded for it as well.

Obviously, I’ll be more careful in the future about having her off-leash in that particular area, and we’ll be doing some remedial recall-with-distractions training. But it made me think about all the times dogs inadvertently get rewarded for bad behavior. For example, I can’t tell you the number of times I’ve been at a client’s home, sitting across the kitchen table listening to them tell me how they don’t want their dog jumping or climbing on them. And yet, during the conversation, any time the dog puts their paws up on the person’s lap for attention, they absentmindedly stroke the dog while chatting. Score! Why would the dog ever stop?

Whether or not to reward a dog can sometimes be tricky. Back in the day when we had Soko, our German Shepherd, I was awakened early one morning by her barking—only it wasn’t coming from our house, but from the neighbor’s house across the way. Apparently, she’d scaled our six-foot chain link fence and had run down our hill, across the dirt path, and over to the neighboring property. I grabbed some treats, walked outside in my pajamas, and in the happiest sleepy recall voice I could manage, said, “Soko, come!” She began to run to me. “Soko,” I continued in my happy voice, “You little brat, I can’t believe you did that, what a stinker you are!” It really didn’t matter what I was saying; it sounded happy. And when she reached me, I did give her treats and got her back inside. Was I rewarding her running off by giving her treats? No. I was rewarding the fact that she came when I called her.

This entry was posted on Tuesday, April 10th, 2018 at 3:52 pm and is filed under Uncategorized. You can follow any responses to this entry through the RSS 2.0 feed. Both comments and pings are currently closed.