Dog Attacks Dog in Home: Is This Situation Salvageable? 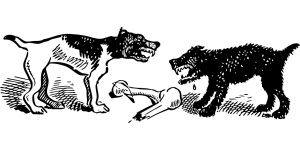 A trainer friend recently asked my advice about a situation involving three dogs who live in the same home. One of the dogs belongs to a young couple who are living with the girl’s parents, and the other two belong to the parents. The couple’s dog is a 60-plus pound bully breed mix, while the other two dogs are much smaller; one is fourteen years old. These circumstances alone do not necessarily guarantee trouble, but in this case, the larger dog had already attacked each of the other two dogs to the point that they required treatment by a vet. The couple is planning to move out of the house within the year, but what, my friend wanted to know, could they do in the meantime? Could training fix this issue and if so, how?

My response was that although it’s always a good idea for a dog to be trained, in this case, strict management was the answer. The dogs needed to be kept separate until the couple moved. You might have seen a television show where a trainer miraculously causes dogs who were previously fighting to throw their paws around each other’s shoulders and sing Kumbaya, but the reality is that this dog had already showed a willingness to hurt the other dogs. Had the attacks not been interrupted, he might have killed them.

Strict management is never easy. Even with the best of intentions, it is extremely stressful to live in a house where one has to be constantly on guard, constantly rotating dogs between safe spaces, and never feeling truly relaxed. Worse than that is if an owner rationalizes that the situation isn’t quite that bad, that it probably won’t happen again if everyone is being careful, and lets down their guard. Interestingly, someone recently brought up a blog post I wrote back in 2012 called Tough Decisions, which described two arguments that I use to this day with owners who want to keep dogs who are at high risk. The blog was about a 14-year-old dog who was at risk of being injured or killed by another dog in the home:

The first thing to consider: “Imagine that you’re living in a house with someone who has attacked you physically. Although someone is keeping him away from you, you know he’s around and that he wants to hurt and possibly even kill you. How anxious and stressed out would you feel, every single minute of every day you were at home? What would your quality of life be like?” (To clarify, this does not apply to those keeping their dogs completely separated visually and physically.) I went on to explain that chronic stress is not only harmful to dogs mentally and emotionally, but also physically; among other things, it can cause gastric ulcers, and suppress the immune system, which opens the door for a variety of diseases. Chronic stress was the last thing this poor 14-year-old dog, who had lived in the safe haven of a loving home all of those years, needed or deserved.

The other thing I said was, “Imagine that you decide to keep this dog, and the worst happens; she kills your 14-year-old dog. How would you live with yourself, when you knew this could happen and that you could have prevented it?” I have worked with many complicated, dangerous behavioral situations over the years, but when the truth comes down to that the dog should simply not be in the home, I have found posing these two questions helpful to allow owners to come to the right decision.

In the case of the young couple my friend was working with, since they would be moving and this was not a permanent situation, the dogs simply needed to be very carefully managed for a prescribed period of time. In permanent situations, tougher decisions have to be made. This is not to say that dogs who are fighting in a home can’t be taught to get along; to the contrary, as a behavior specialist, I’ve worked with many dogs in just this situation, and it is in fact the entire focus of my book Keeping the Peace. But when there is a huge differential in size and strength between dogs, with the bigger, stronger dog being the attacker, that is one very red flag. The same goes for young dogs attacking seniors. The other red flag is the history. If a dog has already demonstrated a proclivity to attack another dog, the intensity curve normally goes up, not down. Working with an experienced behavior specialist is absolutely warranted in scenarios where change is possible, or to assess a situation properly. But the bottom line is that in truly dangerous situations, for the physical safety, as well as the mental and emotional well-being of all involved, another solution should be found.
__________________________________________________________________________________________
You can find my books, seminar DVDs and blog at www.nicolewilde.com. Don’t want to miss a blog post? Subscribe above and be notified by email of new posts. You can also sign up for my Training Tips Tuesdays by going to www.nicolewilde.com and clicking on Join Nicole’s Inside Scoop List. You’ll get free tips on training and behavior weekly! You can also find me on Facebook and Twitter.

This entry was posted on Tuesday, January 22nd, 2019 at 5:18 pm and is filed under Uncategorized. You can follow any responses to this entry through the RSS 2.0 feed. Both comments and pings are currently closed.

13 Responses to Dog Attacks Dog in Home: Is This Situation Salvageable?