The Truth About Consequences 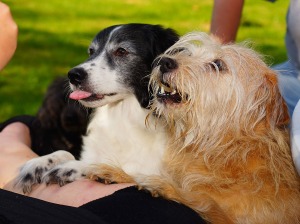 I was sitting across the kitchen table from my dog training client, trying to get a word in edgewise. The woman herself wasn’t the problem; it was her two young children, who kept interrupting, yelling, and generally acting in a way that could only be described as bratty.

The woman warned them: “If you don’t stop that, you’re going to your rooms.” Still, the children carried on.
“I’m warning you. Be quiet and let me talk to the nice dog trainer lady.” Still nothing.
“That’s it, I’m counting to three. One….two….three!” And yet… the kids kept it up.
“Go on, go to your rooms.”
The kids just sat there.
“Okay, then, be quiet if you want to stay.”

Needless to say, this is not the way to establish consequences, whether with children or with dogs. And while we might not be able to tell dogs in the same way we can warn children that their behavior is about to have an unpleasant consequence, we can certainly show them, in a fair, consistent way, that we mean business. In my house, unfortunately, canine incontinence has become an issue as of late. One thing that helps is to take my dogs out to potty regularly. Fortunately, I had put the behavior on cue when they were younger, so they both know what it means when I say, “Go potty!” The problem comes when one or both just don’t feel like it. Who knows whether it’s the hot weather, laziness, or what, but sometimes one dog will just stand there and watch as the other walks with me to the potty area and goes. Now, when my husband, being the kind, wonderful guy that he is, takes them out to potty and this happens, he runs back inside with them and gives them both a cookie anyway. Being nice is great, but in this case, not so effective. And so, I explained that we were only going to reward the dog who pottied. Not only that, but we were going to make a big deal of it. And so, the next time after Bodhi went out and dutifully did his business while Sierra stood on the dog ramp waiting, I gave Bodhi a cookie and lots of effusive praise. I only wish I had a photo of Sierra’s face. Her jaw dropped, and there was a thought bubble over her head that read clear as day, What the…? The next time, it was the opposite scenario, with Sierra being the only one who pottied. And so, she was the only one who got rewarded. On day three, guess what? They both went immediately when cued. And, they both got rewarded. Things have been much easier ever since.

Consequences don’t need to be harsh. They just need to be clear and consistent. For example, my dogs know that before they get walked in the mornings, their job is to sit on the mat by the front door until released. This means exercising self-control while I open the door and scan the porch to make sure there are no rattlesnakes, bunnies, or other surprises out there. When I give the release word, we all go walking. Once in a while, one dog or the other breaks the sit. Do I shrug and think Eh, we’re in a rush, let’s just go and leave, or does the door close again until they reseat themselves and stay? What do you think? While the former is definitely tempting, the latter is what reinforces the behavior. Don’t be lazy! What the specific rules are at your house are not as important as the fact that you have rules, and that you are consistent. The truth about consequences is that dogs understand them and learn very quickly—so long as we are fair and consistent about reinforcing them.
_________________________________________________________________________________________
You can find my books (including my latest, “Keeping the Peace: A Guide to Solving Dog-Dog Aggression in the Home) and DVDs at www.nicolewilde.com. Don’t want to miss a blog post? Subscribe above and be notified by email of new posts. You can also sign up for my Training Tips Tuesdays by going to www.nicolewilde.com and clicking on Join Nicole’s Inside Scoop List. You’ll get free tips on training and behavior weekly! You can also find me on Facebook and Twitter.

This entry was posted on Tuesday, June 5th, 2018 at 2:58 pm and is filed under Uncategorized. You can follow any responses to this entry through the RSS 2.0 feed. Both comments and pings are currently closed.

5 Responses to The Truth About Consequences