From Learned Helplessness to Learned Joyfulness 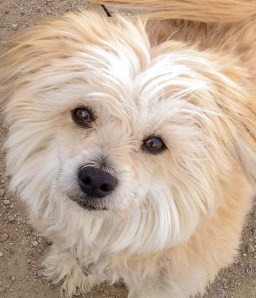 A while back, I watched an episode of Our America where Lisa Ling was exploring the world of underaged prostitution. The eleven- to sixteen-year-old girls were mostly runaways who were “rescued” from the streets and then sent out to turn tricks by men who, for all intents and purposes, held them hostage. When some of the girls tried to leave, they were beaten and intimidated, to the point that they never tried it again. Naturally, this was terrible to see. But with my mind never being far from dogs, I also started thinking about dogs who develop that same attitude of learned helplessness.

Many dogs come into the world with an open and trusting attitude, only to have an experience or series of experiences that cause them to become suspicious of people. Maybe someone is heavy-handed when doling out punishment; or, perhaps the owner is unpredictable from the dog’s point of view, and lashes out in anger. The dog becomes wary of the owner, and develops a fear of doing the wrong thing. The dog is now afraid to offer any sort of behavior, or even to respond when asked to do something, for fear that their repsonse will be wrong and they’ll be punished. When we adopted Sierra from the shelter, she demonstrated some disturbing behavior during our first training sessions. Although my hand signal for “stay” was small and gentle, when I put my hand up, her ears went back and her eyes got squinty. She wouldn’t move. In short, she seemed afraid to do anything at all.

I had a client once who told me that their dog Ranger was very much afraid of her husband, but that when the husband had Ranger on leash, the dog was very calm. A brief observation of the relationship between the two, and seeing what happened when Ranger was leashed, told a different story. Ranger had learned that once that leash was on, there was nowhere to go. So he shut down. To the untrained eye, it’s easy to see how a dog might appear calm, when in reality the dog is simply resigned that there’s no way out.

A friend who is also an excellent trainer told me about a workshop she attended. It was an e-collar (shock collar) seminar, and to her credit, although she doesn’t use e-collars, she wanted to understand more about where trainers who use them are coming from. She had heard many people rave about how this particular presenter was able to get dogs who were wild and crazy to behave in no time. Unfortunately, it was just as she’d suspected; the dogs appeared “improved” or “calm” alright, but that’s because they were afraid to do anything for fear of being shocked! There’s a definite difference between a dog whose body language says, “Okay, I get it, you don’t want me to do that” and still looks bright and happy, and one whose light has been extinguished. The latter is unutterably sad to witness.

So what can we do about dogs who already have a sense of learned helplessness? Well, we take it slow and don’t push them in training or in other areas of life. We learn to read and respect their body language. And, if you think about it, what’s the opposite of learned helplessness? Offering behaviors! How do we get dogs to offer behaviors? We teach them the principals of clicker training (with or without an actual clicker), which uses markers and rewards to encourage the dog to offer behaviors. I can tell you that Sierra has gone from a shut down, wary rescue dog to one who will happily offer spins, bows, and a number of other behaviors when she sees the Holy Treat Bag make an appearance.

Bottom line, there is most definitely hope for these dogs. We just need to be able to recognize the symptoms, and work with the behavior accordingly to change learned helplessness into learned joyfulness.

Leadership: One Size Does Not Fit All 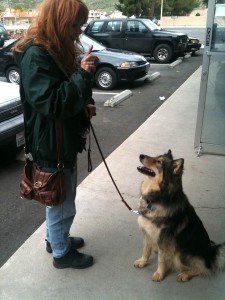 Flip through the pages of any traditional book on dog behavior, and you’re likely to find advice about how to be the “boss” or “alpha”—the Big Kahuna. Never feed your dog before you sit down to your own meal. Make sure you go through doorways first. Don’t ever walk around your dog. Never let your dog up on places you sit, like your couch or bed. You might be surprised to know that I couldn’t care less about any of those rules.

Many trainers advise owners to employ some version of a leadership program, meaning the dog has to earn things in their everyday lives. There’s nothing wrong with that, and although I have long advised clients to employ some manner of a learn to earn program, especially if their dogs are overly pushy, I’m not one to be overly strict in that regard with my own dogs. Don’t get me wrong; I firmly believe you should be able to ask your dog to move aside, get off the couch, and do any number of other things when asked. It makes sense to me personally to have my dogs sit before meals, especially because Bodhi can be physically pushy and impatient. It’s a good thing for him to practice waiting, and for me not to spill the food all over the place! When I take my dogs out for a walk, they both need to sit and wait at the door while I open the door, look out on the porch, and then back to them to give the release word. During the summers, rattlesnakes have been known to slither up on to our porch; this is not only a manners issue for us, but a safety one, too.

But what about the other aspects of a traditional leadership program? My dogs are allowed up on our couches—that is, when the couches are covered by the colorful blankets we use to keep them dog hair free. (Well, mostly—is anything ever really dog hair free?) If one of my dogs is lying across a doorway, depending on whether they’re in deep sleep, how convenient it is for me to step over them, and whether they’ve been extra pushy lately, I might just let them sleep or lie there, or I might ask them verbally to move out of the way. As for who eats first, I once heard from someone who owned a wolfdog that he always spit in the dog’s dish before he put the food down, so the dog would know who was boss. I can only wonder what the dog actually thought. My dogs eat somewhere in the neighborhood of the same two times during the day, but if I have something pressing to do, they may have to wait. Learning frustration tolerance is a good thing, and hey, if I’m controlling all the good stuff, I obviously am in charge, without having to be heavy-handed about it.

I once heard someone (I believe it was English behaviorist John Rogerson), say that the specific rules aren’t as important as the fact that there are rules. I wholeheartedly agree. Take a moment to think about whether the rules that you’ve learned “must” be taught actually make sense for you and your own dogs. Now think about the rules you have that might not be important for someone else. When it comes to leadership, one size does not fit all.